My best April Fool’s Day ever 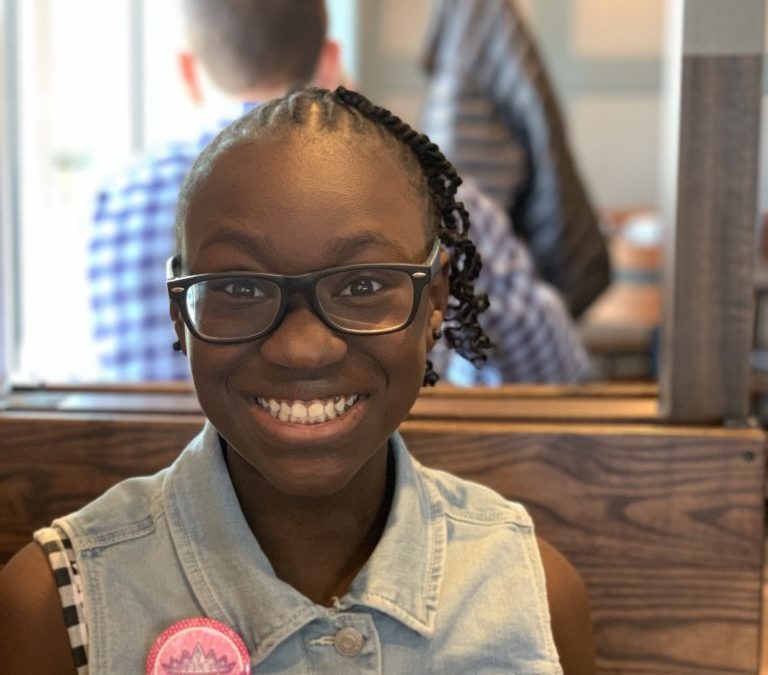 On April Fool’s Day eleven years ago, I had the most memorable experience. It was so amazing that two days later, I sat down to write about it.
Here it is.

We are very excited about the arrival of our daughter Chetachukwu and we know that you are happy for us too. The truth though is that you will never quite understand our joy except you know the conditions of her birth. I had a wonderful pregnancy, no morning sickness, reflux, swollen feet or anything of the sort. However, a call that I got on the day after thanksgiving 2007 when I was about 21 weeks along was to change my story.

Cheta was found to have a congenital diaphragmatic hernia, which is a hole in the diaphragm (the muscle that separates the chest from the abdomen). As a result of this defect, part of her liver was in her chest. In addition to this, she had a significant quantity of fluid in the sac around her heart. The real problem was that between the liver and the additional fluid, there was not much space left in her chest for her lungs to grow. The prognosis was pretty bad at best because she was diagnosed at a critical period of rapid lung development. She would need surgery in the first week of life and would definitely need to be on life support ranging from a regular respirator to ECMO, which is like a heart and lung bypass machine. They tried to be encouraging, but they did not downplay the fact that her condition would be critical and despite their efforts she may not survive.

My OBGYN promptly referred us to a maternal fetal specialist who on evaluation decided that the best place for me to receive my care would be at the Children’s Hospital of Philadelphia. We were told we could opt for an abortion, the rationale being that her chances of survival were slim and even if she did make it, she would have a very complicated course. When we declined, a plan of care was developed which involved frequent follow up visits at CHOP, which was a good 2-hour drive away, and weekly ultrasounds. The pregnancy continued with no additional complications.

At 36 weeks, I had to relocate to Philadelphia because my doctors did not want me to go into labor so far away. The delivery needed to occur in very controlled setting. I thought that was particularly disruptive, but I had to do what was best for Cheta. I was told that if I did not go into labor on my own they would induce me at 39 weeks. When I got there though, on further evaluation they decided the best thing would be to have her by a C-section so they could drain the fluid around her heart first and then deliver her.

In the midst of all this, there was a serious mind battle going on. My husband and I are both Christians and have experienced God’s healing power personally. I had to trust God for a favorable outcome for Cheta even though all the medical knowledge in my head was fighting against all I believed in. It is traditional for Christians to believe that God heals and antagonize their doctors. Our belief is that the devil steals, kills and destroys every way he can and that it is the same in God’s kingdom. We believe that it is God that is behind the advances in medical science and so we embrace rather than reject it. What we do not believe is that in any circumstance that the doctors’ word is the final say. Thank God that His word is the final authority.

Throughout the pregnancy, we continued to speak God’s Word over Cheta, declaring that she was healed, that she would live and not die. We trusted that God’s healing hand would make her perfect. We did everything that we knew to do according to God’s principles but on the outside it seemed like nothing was changing. The good thing is that God’s word had an answer for that too. It says, “Having done all to stand, stand therefore”. So that is what we did. Every week the ultrasounds looked the same and the assessment by the doctors became more and more concerned but we just stood and trusted God for a miracle. Even though we had every reason to worry, we couldn’t because we had that inner peace that assured us that all was well.

I had a C-section on the 1st of April in an operating room with more than 10 physicians including Obstetricians, Anesthesiologists, Pediatric Surgeons, and Neonatologists. Cheta had the fluid around her heart drained first, and then she was delivered. She cried at birth, which no one really expected her to do because of how tiny her lungs had looked on the ultrasound. The team meant business though and she was whisked away so fast that all my husband could see was her back for all of 2 seconds. She was immediately hooked up to a breathing machine and had catheters put in every spot they could find. After the initial resuscitation, she was taken to the Intensive Care Unit. She continued to be pretty unstable and within hours of her birth the surgeon came back and said they would have to take her to the Operating Room immediately. I could understand the risk that carried. First of all, taking a newborn to the OR on the day of birth is risky, how much more an unstable one!!!!!!! Well, this is where the manifestation of the miracle of it all began.

The surgeon and anesthesiologist warned us that her critical condition made a negative outcome much more likely. We knew what we believed God for so my husband paced the hallways releasing God’s creative words over the situation. She went to the OR, the liver was pushed back into the abdomen and the defect in the diaphragm was repaired. She was completely stable after that and everyone was shocked. The lungs that everyone expected would be a big problem were working so well that even though she was on a breathing machine they were forced to place her on the lowest settings. By the 2nd day of life she was taken off the breathing machine and on the 3rd day she started feeding!!!!!!!!!!!!! This was very shocking for everyone because they thought that she would need to be on the breathing machine for months and even with that they were not sure the amount of lung tissue that she had was usable. Eating??? That was definitely out of the question. She surely was not supposed to be doing that. It was uphill from then onwards. It was very funny to hear her doctors and nurses talk about her. They would say things like,” I think everyone except your daughter realizes that she is sick”, “ She has broken every record that we have”, Whatever you believe in surely works because she is a miracle”.

Naturally speaking, we shouldn’t have a daughter to our name and even if we did we should be with her in the Intensive Care Unit watching her battle daily for her life. We are grateful to God for what He did in her. My doctors have no explanation for how she just got better; they also had to conclude that she is a miracle.

Now that you know, you will understand why we are ecstatic!!!!!!!!!!!! It is not a coincidence that her name is Chetachukwu, which means, “Remember God and His mighty works”. Cheta is the child we could have lost or that could have gone through months of illness with long-term sequelae. Instead God has given her to us, completely whole, 7lbs 1 oz, 50cm long and absolutely gorgeous. Thank God with us.